An office of elite mortgage lending professionals with a common interest and goal focused on providing customer service that exceeds expectation. Thereby building our business from repeat and referral opportunities. Ruth Vogt. LMB 100023827. NMLS 257576. Regulated by the Division of Real Estate. Fairway Independent Mortgage is an Equal Housing Opportunity. 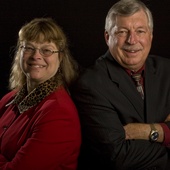 Many of you have seen Donna's picture, read her blog, and even been regular commenters on her posts. Her husband, Rich, told me today there have been many emails sent to Donna from her friends at AR asking where she was and was she okay because she hasn't been blogging. So, with his permission, I'm writing a brief post to let you know how concerned we are all about her health right now. And to ask for your prayers.

Donna wasn't feeling well early last week, she thought she might have eaten something that caused food poisoning. Just a little over a day and a half later, she needed to be rushed to the hospital, had undergone two surgeries, and as of today, a week ago now, she still has not regained consciousness long enough for the doctors to feel it's safe to remove her air tube. Her white blood cell count today was so elevated that it is obvious the removal of approximately 75% of her small intestine did not rid her body of all the infection. The last I heard the doctors were weighing the pros and cons of yet another surgery.

Please take a moment to mention Donna in your prayers if you would.

Opinions expressed here are the sole responsibility of the author, and do not necessarily reflect the view of Fairway Independent Mortgage.

Regulated by the Division of Real Estate.